Recently, we focused on the importance of using a VPN. Now we’re going to dive deeper and take a closer look at 6 popular VPN solutions on the market that are both for personal and commercial use: ExpressVPN, NordVPN, IPVanish, TunnelBear, CyberGhost and Private Internet Access. Note that there is also a vast variety of VPN solutions that are enterprise driven, maybe one day will take a closer look at them too!

Did you know there are over 300 VPN solutions available? Sometimes the differences between them are large and easy to identify. Other times, the differences are much subtler — like trying to tell the difference between a geek and a nerd!

We’ll get to the analysis in just a moment. First, we thought it would be helpful to highlight some of the key features that influenced our decision making. In addition to the fundamentals — such as download speed, privacy and security, logging policy, torrenting, usability, support and price — here is what we looked at:

ExpressVPN is a highly secured VPN that is simple and intuitive to use. It offers great support and a vast range of features that are good for both beginners and experts.

ExpressVPN is packed with multiple features and is easy to use. It’s perfect for anyone who isn’t too computer-literate, but it’s also good for geeks and experienced VPN users. It is an excellent choice for anyone who values privacy and security above all.

NordVPN is very intuitive and is suitable for all users who need strong security and privacy.

NordVPN doesn’t offer a free version. As noted above, the yearly plans are affordably priced: $2.72/month for a 3-year plan and $6.99/month for a 1-year plan. The 6-month plan is also pretty good at $9.00/month. However, the month-by-month plan is $11.95/month, which makes it one of the pricier options (for example, it’s about 20% more than IPVanish). There is a 30-day money-back guarantee, but if you want your money back it’ll take another 30 days — so keep that in mind.

IPVanish users will love the number of powerful features. However, it’s a bit on the complicated side, which probably makes it more suitable for advanced users vs. VPN newbies.

TunnelBear is a Canadian-based VPN that is now owned by McAfee. It’s a simple and hassle-free VPN that easily brings online privacy to everyone.

TunnelBear is great for anyone new to the world of VPNs. If you’re a more experienced user and want more advanced and sophisticated features and configuration options, then you probably want to look at some of the other products on this list.

TunnelBear offers 3 plans: Little, which is free with 500MB of data every month, Giant, which is a month-by month plan at $9.99/month, and Grizzly which is a 1-year plan at $5.00/month and unlimited data. Like Goldilocks and the three bears (or in this case, Goldigeek and the three TunnelBears), your task is to pick the plan that is juuuuussstt riiiiggghhht for you.

CyberGhost is a fast and powerful VPN with strong encryption. It’s easy to use, while still providing plenty of features.

CyberGhost is a great VPN service that offers many useful features that will satisfy advanced users. At the same time, the simple UI is good for VPN newbies.

With their lack of live support, this might not be the best VPN for beginners. However, it’s a good choice for more advanced users who want strong security at a really cheap price.

Here’s a comparative table for a quick glance at some important features and information about each of the reviewed VPNs: 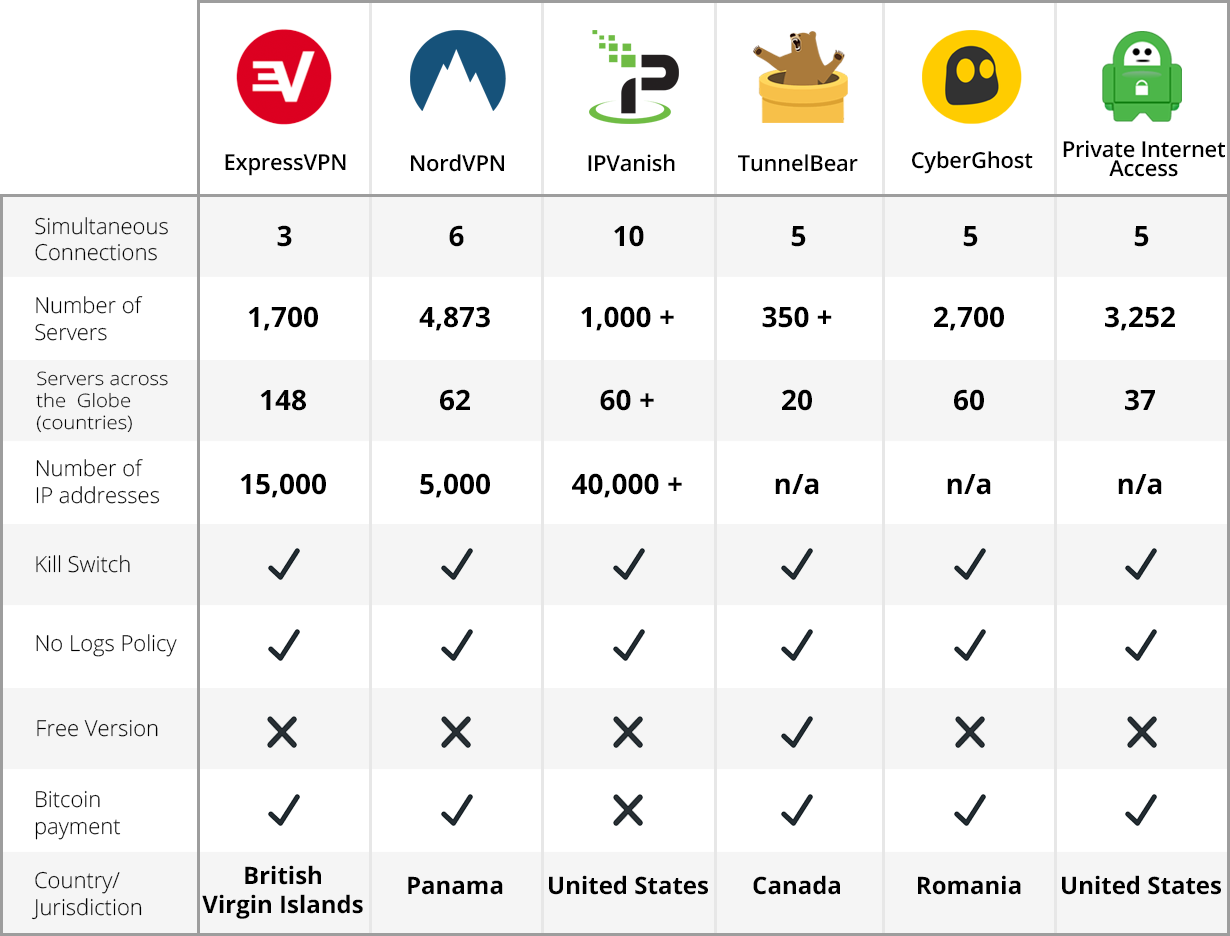 And there you go, folks! Let’s never forget that adding an extra layer of security shouldn’t be seen as optional. We hope that you find this analysis helpful, and that it makes your task of finding the right VPN service much easier.

If you know of any additional advantages and/or drawbacks of any of the VPNs that we evaluated, or if you’d like to highlight a service that isn’t on the list (there are over 300 on the market so there’s plenty of choice!), then please share your insights and advice by posting below.

The above descriptions of ExpressVPN, NordVPN, IPVanish, TunnelBear, CyberGhost and Private Internet Access provide only a summary of their respective specifications. Please consult their websites for further details.