All Customer Stories Team Fun & Lifestyle News Polls Products Reviews Security Sysadminotaur Tips & Tricks Whitepapers Videos
Download
We often receive questions about our SSH Tunnel entry. What does it do exactly? When do you need it? What does it eat in winter? How do you actually set it up? Let’s take a deeper look at it!

SSH tunneling is used to create a secure connection between a local and a remote computer, by going through another device that relays a specific service. Some people call this device a Jump or server. It’s basically an encrypted tunnel created through an SSH protocol connection. The SSH Tunnel can be used to establish a form of a virtual private network (VPN), and since the connection is encrypted, it can be useful for transferring unencrypted traffic over a network through an encrypted channel.

For example, we can use an SSH Tunnel to securely transfer files between a FTP server and a client even though the FTP protocol itself is not encrypted. It could also be useful when connecting a client through an SSH server protected by a firewall. SSH tunnels also provide a means to bypass firewalls that prohibit or filter certain internet services.

There are three ways to create an SSH tunnel:

Dynamic port forwarding: The connections from various programs are forwarded via the SSH client, then via the SSH server, and finally to several destination servers. Each program that uses the proxy server needs to be configured specifically, and reconfigured when you stop using the proxy server. For example, dynamic port forwarding lets you bypass a company firewall that blocks web access altogether. It is rarely used as it is very time consuming to set up.

We will showcase the local port forwarding mode as it is the most commonly used by far.

To create an SSH tunnel, a given port of your local machine needs to be forwarded to a port on a remote machine, which will be the other end of the tunnel. This is the job of the SSH Server.  Once the SSH tunnel has been established, the user simply connects to the local end of the tunnel in order to access the remote host transparently.

This might sound more complicated than it is — so let’s look at a concrete example of how to set up an SSH Tunnel. Let’s say you’re the IT technician at your office and need to connect to a client through an SSH server to perform work using RDP, but (there is always a but) it is protected by a company firewall. You need to get through the firewall in order to perform your work. The solution is to create an SSH Tunnel in Remote Desktop Manager to carry the RDP communication. 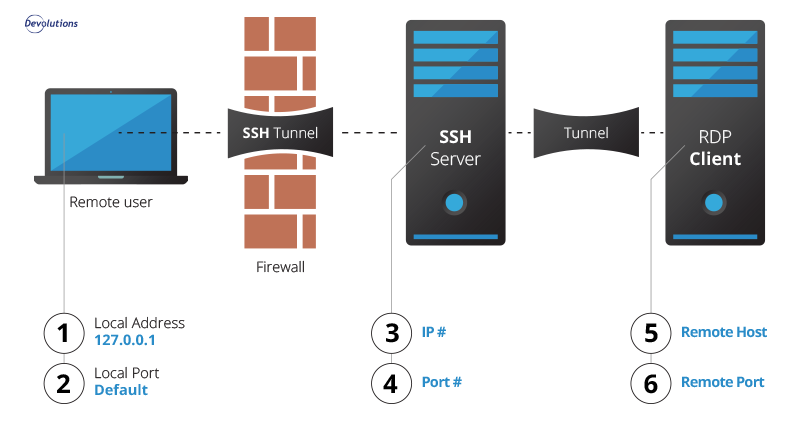 In the SSH Server Settings, enter the following information:

In the Outgoing Tunnel Settings, enter the following information: 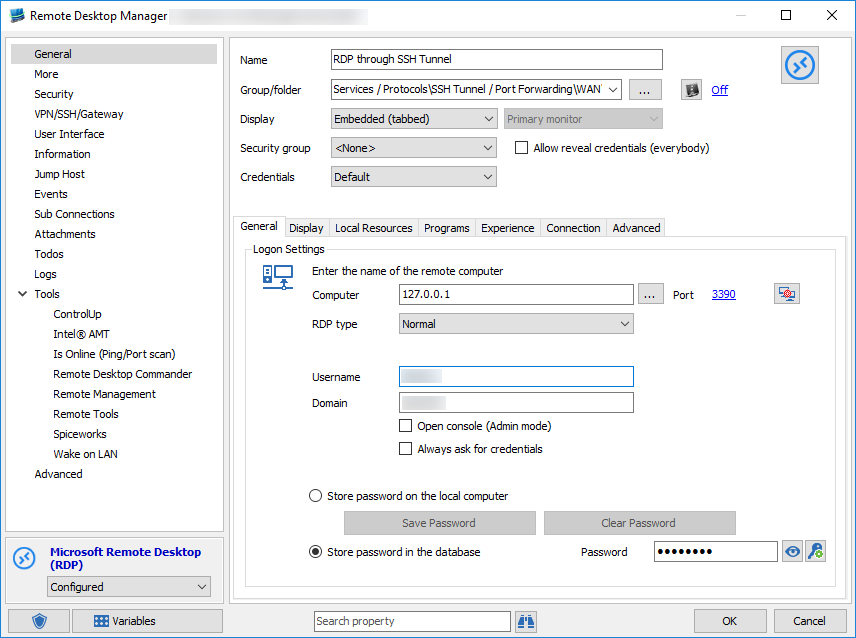 Then create your remote session (in this example we will use an RDP session).

In the VPN tab of your session, in Open, select Always connect; in Type, select Session.

And finally, in the Settings tab of your VPN, simply select your newly created SSH Port entry.

One little side note: if you experience an error when launching your RDP session, adjust the After Execute Wait delay in the VPN/SSH/Gateway tab, which is located in the advanced properties of the session. As some servers are slower than others, the delay may be too short, in which case the session would get launched before the SSH server has had time to properly connect.

We truly hope that we’ve helped demystify the SSH Tunnel for you and, in doing so, made your day a little bit better!