Thirty years ago, if you tried telling the world that in the future people would use this “thing” called the Internet to do everything from buying a home to working at home, they would have looked at you as if you were from outer space. But here we are!

What technology trend will dominate the story in the decades to come? That was the focus of the September poll question. As we had hoped, there were many interesting responses and comments from the community.

The three technology trends that received the most votes (and by a wide margin) were AI, quantum computing, and machine learning — and we are already seeing game changing advances in these areas. For example:

We can’t go on without highlighting community member Rick Hensley’s hilarious comment that the confluence of AI, quantum computing, and machine learning will surely lead to a robot uprising…at least we hope it’s a joke and not a prediction!

There were several other influential technology trends that made the list, including:

What makes this discussion even more interesting — and complex — is that these technologies do not exist in a vacuum. For example, advancements in areas like blockchain and VR are going to accelerate innovations in AI and ML, which in turn are going to drive 6G and biomedical monitoring…and the connections continue. Ultimately, the only thing that we can say with certainty is that due to technology, things are going to change with unprecedented speed and magnitude in the years ahead — in ways that we can currently imagine, and in even more ways that we cannot.

To start with, you’re all winners because if there IS indeed a robot uprising, surely you’ll be the heroes that save humanity.

Now, let’s reveal the two randomly-selected poll participants who will each enjoy a $25 Amazon gift card: congratulations to Ron and Matthew Erb! Please email me at lcadieux@devolutions.net to claim your prize.

Please stay tuned for the October poll, which we promise will be “frightfully” good! 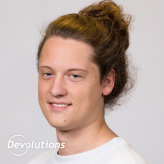